When the Bottom Falls Out: A 9/11 Widow Reflects

For days Shelly kept making dinners for her husband who worked with Cantor Fitzgerald
near the top of the North Tower. She waited for Steve to call or just show up. 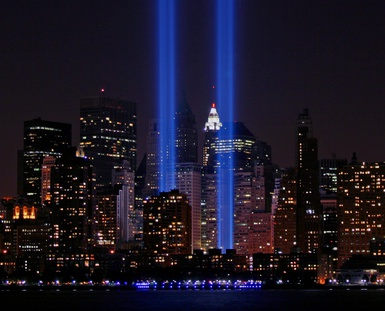 “Shelly, wake up! Answer the phone! I think a plane just hit my building! Turn on the TV. Wake up!”

On September 11, 2001, Steve Genovese’s panicked phone message was his last words to his wife, Shelly. As a partner and over the counter trader with the financial services company Cantor Fitzgerald, Steve worked on the 104th floor of the World Trade Center’s North Tower, six floors from the top of the landmark building. At 8:46 a.m. American Flight 11 dozed into floors 93-99. Steve was one of 658 Cantor Fitzgerald employees who were killed in the North Tower that unimaginable Tuesday.

Shelly’s mom was visiting and saw the devastating 9/11 news unfolding via television. She rushed from the living room to Steve and Shelly’s bedroom. “Shelly, wake up! Call Steve!” Shelly tried Steve’s cell phone a number of times with no answer. When Shelly checked her own phone and heard Steve’s message, she thought to herself, Steve called. He’s fine. Shelly joined her mother and millions worldwide to watch the terrorism devastation on TV. When the South Tower collapsed at 9:59 a.m., Shelly consoled herself, Steve still has time to get down. At 10:28 a.m. when Steve’s building imploded to the ground, Shelly fell to her knees screaming. “I fell apart and literally collapsed when the tower collapsed. I felt the horror,” Shelly remembers of that horrific scene broadcast across the planet.

“As I lay on the floor, screaming and crying, all of a sudden I had a burden lifted off of me. There was tremendous peace that came over me, a comforting feeling,” Shelly explains. “I really believed at that point that God was saying, ‘Steve is okay. Get up. He’s okay and he’s coming home.’”

Buoyed with hope beyond hope, and to the dismay of the people gathered around her, Shelly collected herself and headed to the kitchen to bake strawberry bread for dinner. Over the next several days, loved ones searched hospital after hospital for Steve. Everyone seemed to accept that Steve was one dead. Everyone accept Shelly. For at least a week she kept making dinners for Steve and waited for him to call or just show up. On a shopping outing, Shelly was picking out a shirt for Steve and turned to her mother asking, “Do you think Steve would like this?”

Finally a local newspaper headline, “Husband, Father, Friend Not Coming Home,” confronted Shelly with the finality of the murderous attack. Steve would not eat dinner again with the family. He would not hear his 16-month-old daughter, Jacqueline, say her first complete sentences or be there for her first date.

Looking back 15 years ago on that surreal day, Shelly better understands the peace that enveloped her when the North Tower crumbled. “Now I know that peace that I had was a peace that Steve was home. I believe in that very moment, Steve was entered into the kingdom of heaven.” The comfort that Steve is in heaven helped carry Shelly through the agony of instant widowhood. Within three months of the tragedy, Shelly sold their house in New Jersey and she and Jacqueline moved to Texas to be near Shelly’s family. In time, she began to talk at colleges, conferences, and churches about her loss and her faith that God can always be trusted no matter how dreadful the circumstances.

“I know that when you are at your lowest in life is when God shows up the biggest. And I have always felt Him present, taking care of us,” Shelly says. “There were times I don’t even know how I was walking, but God was carrying me. I was able to get up and take care of my baby and go speak. That came only from God because there is no way that I could have ever done any of that myself.”

The young widow also grounded herself in reading Scriptures passages and recounts how Steve and her would read Psalm 91 together. In the initial fog after seeing the Twin Towers topple that morning, Shelly opened her Bible to Psalm 91 and verse 2 emboldened her: “I will say of the lord, ‘He is my refuge and my fortress, my God, in whom I trust.’

Trust and hope are two words indelibly etched on Shelly’s life this past decade and a half. “I had to learn to completely trust and rely on God because I had relied in many ways on my husband to be there. Jeremiah 29:11 promises ‘a future and a hope.’ At times, I couldn’t see a future,” Shelly confides. “I couldn’t even stay home by myself. I hated being home, because when I was married, I’d cook and we’d have dinner and we had this cute little family and we’d sit around after dinner and life was perfect. And after Steve died, I spent years being afraid of being home alone because I didn’t want that lonely feeling of that loss.”

To cope, the full-time mother “traveled and shopped and filled my life with things that really were kind of surface happiness.” But that initial emotional numbing stage wore off. “There were times when I felt I would never be happy again. Or no way that I could ever feel safe and not hate the world for what’s happened to me. But God restored all that,” Shelly explains. “God brought me back. I feel like I’m back to that place where I am comfortable to be alone, comfortable to be home. I love that feeling now.”

Part of the restoration for Shelly was running into a guy friend she met years before while modeling in her teen years near Dallas. In November 2005, Shelly and Heath Calhoun married and had a son, Cash, a year later. Big sister Jacqueline, now 16, takes a trip back to New York City/New Jersey every November with Shelly to visit Steve’s family, and more recently, reflects at the 9/11 Memorial and Museum, which Shelly describes as both “unbelievably beautiful” and “overwhelming.”

“This time of year around 9/11 is always the hardest. All the emotions come pouring back. The loss is so public,” Shelly shares. “You can’t get away from seeing those buildings fall over and over again and kind of reliving that moment.”
Whether Shelly speaks to a group or individually with someone about 9-11, she finds a common thread. “I find that people want to hear about the hope. That there is still hope after something so horrible happens in your life,” Shelly affirms. “They want to hear how God gives people hope.”

And these days, the little things tend to stand out more to Shelly Genovese Calhoun. The conversations with Jacqueline about her Dad’s strong character and his winsome way of putting everyone at ease. The eating of Shelly’s fresh strawberry bread that Steve loved.

“Jacqueline reminds me so much of Steve. Her expression, the way she looks reminds me of him. She walks like him,” Shelly fondly reflects. “Jacqueline even has a little mole on the side of her head that is in the exact place that Steve’s was. It’s little things like that that can make you so happy and bring back such good memories.”