Unexpected Kudos for Us All 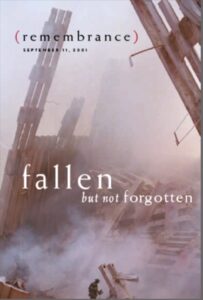 Kudos are the praises, applause and compliments we receive for a job well done, a successful accomplishment or a thank you for serving others. Have you received any kudos lately? Well, I am sending you one right.

Kudos for being a part of my blog family and for reading this post right now. I applaud you for being a person of grit and integrity. I compliment you for your tenacity and your encouraging others.

And now, here’s some unexpected kudos that I received this week that you deserve too because you stand with me each week in support of my writing.

In the immediate aftermath of  the devastating 9/11 attacks, I was asked to interview several individuals personally impacted by airline explosions. One was Shelly Genovese, the widow of Steve who was killed in the North Tower. Another was Lisa Beamer whose heroic husband, Todd, helped lead the charge of “let’s roll” to the passengers on United Flight 93 before it crashed in the Pennsylvania field. Representing the Pentagon rampage was Lt. Col. Brian Birdwell, the U.S. Army officer who was burned on over 60 percent of his body. American Airlines Flight 77 rammed into the Pentagon just three windows from Brian’s office.

My writings were included in an evangelistic booklet/mini magazine titled Fallen but not Forgotten that was shared with countless people. This was an intense, rush project and I recall tearing up several times in my telephone interviews with these three. I just never heard specifics on the booklet’s final distribution—until this week.

An editor colleague of mine who was in New York City shortly after the terrorist attacks, included these comments in her 20thanniversary recap of those somber days.

“In time, we produced an evangelistic booklet called Fallen but not Forgotten, set to be distributed at a memorial service hosted by Oprah at Yankee Stadium. God’s Spirit breathed on that booklet and gave it wings. It continued to be distributed at Ground Zero, in then-Senator Hillary Clinton’s office, at NYC firemen funerals and around the country. As far as we know, 15 million went out to hurting people. My family went to NYC for Christmas that year and I took my parents down to Ground Zero; someone handed us the booklet!

I was headed to the memorial for the firefighters, police and EMS workers. Some 650 volunteers joined us at the YMCA near Central Park to grab bundles of magazines. I was with a group of students from the University of Toledo.

When I saw their eager faces, I thought, The reinforcements have arrived! Thank God. They had driven all night and slept on a church-floor basement to help out. We hit the subway en route to Yankee Stadium, passing out magazines as we went. I’ve never seen anything like it. People were approaching us! And the students were full of faith; they really encouraged me.

I saw magazines everywhere. Red Cross workers, policemen and victims’ survivors held them along with the roses, Kleenex and stuffed animals that were distributed by the city upon entering. I’ve never seen anything like it. On the subway home, I looked up to see a Latino boy, a Chicago fireman and a Catholic priest all reading the magazine. Surreal.

Later, we heard more and more stories. One group ended up at the same steakhouse as Mayor Giuliani and gave him one. Another had a troop of policemen ask for some for all their buddies. One member of our staff said that in 40 years of ministry (including outreach in Russia), he had never seen such openness! I believe it. And I don’t think this is just in New York. We had a team in DC, and they were seeing the same thing.

Wow! Some 15 million copies of Fallen but not Forgotten likely made it into the hands of Oprah, then Senator Hillary Clinton and former New York City Mayor Rudy Giuliani! Beyond these more well-known people, millions of others from firefighters and police officers to grieving loved ones and subway commuters read the stories I was privileged to write. Wow! Wow! Wow!

I truly had no idea of the far-reaching impact of this incredible booklet. So let me leave you with these words of encouragement. You just never know how what you work on today will be used for grander purposes beyond yourself. You just never know how your faithfulness to stick with even the most mundane things can turn into something of eternal significance.

Never give up using your time, skills and strengths to help others. And always stay grateful when you receive the most unexpected kudos—even if they arrive two decades later.