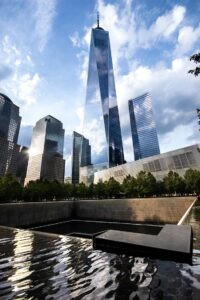 For many of us, the date 9/11 is seared deep upon our hearts and minds. I’ll never forget that unbelievable morning. I was working from home and in my front yard about 7:45 when my neighbor yelled to me that something terrible had happened in New York City. I rushed inside to catch the live television coverage. I barely budged from the TV that entire day.

In honor of all those who lost their lives on September 11, 2001, and to stand alongside their loved ones, I am sharing two archive blog posts I wrote about 9/11 widows. These two women remain in my thoughts and prayers as we as a nation and world pay tribute to the 20th anniversary of these unthinkable tragedies.

Shortly after 9/11 marred its way into our lives, I had the privilege of interviewing a Pentagon attack survivor and a number of grieving family members directly affected by the terrorist mayhem. I talked with Lisa Beamer, whose husband Todd became one of the iconic passengers aboard United Flight 93.

Todd’s “Let’s roll” rallying cry emboldened a courageous handful of passengers to storm their attackers before the commandeered airplane slammed into a Pennsylvania field. Instant comrades in their last moments, Todd and the flight’s other brave passengers saved unknown thousands of lives on the ground that fateful September morning.

Just a few weeks after losing Todd, Lisa’s grief was painstakingly fresh yet her words comforting.

“If your perspective is only on this life and you are holding onto your little world at all costs,” she explained, “that’s going to be a very fearful thing. Anything can impinge on your security or threaten it—especially terrorism. Despite all the best efforts of our government, we will always be vulnerable in some places.”

Looking Above and Beyond

“Most people’s knee-jerk reaction to the events of September 11 was to look to something higher than themselves—go to church or a prayer service—and I think that’s an indication that people deep down know that this isn’t all there is to life,” Lisa continued. “It’s easy to forget about those deeper issues when life is good, but when a true crisis strikes and people’s earthly security is knocked out from under them, that God-given desire for looking above yourself and beyond yourself comes through.”

What wise words from a newly widowed 32-year-old—a pregnant mother suddenly raising two small boys on her own. Fear hisses when our circumstances spin out of our illusion of control. Fear claws into our thoughts and hunkers down until we look above and beyond ourselves. This 180-degree change in perspective happens when we train our eyes to view the needs of others around us and steady our focus to “see things from [God’s] perspective (Colossians 3:2).

As Lisa reminds us, “If your perspective is only on this life,” fear will eat away at the best of you. We won’t all be called to bravery at 36,000 feet like Todd Beamer. But we can start rolling today with looking above and a beyond our fears right in front of us.

What a privilege to interview Shelly Genovese again. The last time we talked was two weeks after her husband Steve was killed in the al Qaeda terrorist attack on New York City’s North Tower. I wanted to know how Shelly and her daughter Jacqueline (16 months at the time) have fared over the past fourteen years.

The most difficult question for me to ask Shelly was: Were you involved in the identification process? “Steve’s brother did that,” Shelly explained. “Steve was identified by his dental records.”

How sobering. How does someone keep going after the only thing that remains of your spouse are portions of his teeth?

Initially in the months and years following Steve’s death, Shelly filled her emotional void with traveling and shopping and on-the-surface distractions. But nothing brought continual relief, except one thing. Her trust in God to give her “a future and a hope” (Jeremiah 29:11).

“There were times when I felt I would never be happy again. Or no way that I could ever feel safe and not hate the world for what’s happened to me. But God restored all that,” Shelly affirms. “There is still hope after something so horrible happens in your life. When you don’t see that hope in the present, it comes down to trusting that God’s got a plan for you. I always knew to trust in God’s Word and to rely on that in every aspect of my life, but now I have lived it.”

Every November, Shelly who moved home to Texas and has remarried, travels back to New York City with Jacqueline. Twice so far they have visited the 9/11 Memorial and Museum, which Shelly describes as both “unbelievably beautiful” and “overwhelming.”

That’s how I’d describe seasons in my own life. I’m sure you can relate. And when we can’t yet see “hope in the present,” Shelly reminds us to keep trusting when life feels both unbelievably beautiful and overwhelming.

Dig Deep and Refuse to Buckle

Both these interviews with 9/11 widows are remarkable stories of bending. When Lisa’s and Shelly’s lives were horrifically altered by evil, they chose to stand firm and steadily made a comeback through their excruciating loss. Day by day, they found comfort and strength. They dug deep and refused to buckle to fear and anger.

On this 20th anniversary of 9/11, may we all unite in remembering those lost in the senseless acts of terrorism and pray for their loved ones who continue to soldier on bravely. Together let’s roll and bend onward!