I See Your Courage 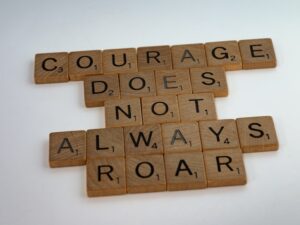 I see your courage. I do. You work hard to steady your family, your work, your health and your finances. I see your courage when you sacrifice sleep to catch up on yesterday’s to-dos. When you bravely give to others even if your own tank is dipping toward low. Yes, you prefer a balanced, simple life, but some days “balanced” and “simple” are not on the menu. And remember, courage does not always roar.

Courage is sometimes defined as “strength in the face of pain or grief” or “the willingness to confront agony, uncertainty or intimidation.” You know plenty about willing yourself to keep going, to keep bending when you’d rather pull the covers over your head and stay in bed. But you don’t and neither does Martin Pistorius. Let me tell you about Martin’s courage.

Trapped in His Own Body

Young Martin came home from school one day with a sore throat. The twelve-year-old never returned to his school. Within a year, an unknown illness deteriorated Martin into a mute quadriplegic who spent his days at a care center, blankly watching television, barely able to lift his head. Over ten unimaginable years, the South African boy grew into a man trapped in his own body. He could hear every conversation around him, but he just couldn’t communicate back.

Ghost Boy is one of the best books I have ever read. It’s the page-turning account of Martin’s misdiagnosis and eventual learning to use a computer to communicate, make friends, work, and find true love. Martin’s bravery and his comeback are inspiring to say the least. Here is an excerpt that describe Martin’s resiliency when the world around him was, in many ways, simply waiting for him to die.

“My mind was trapped inside a useless body, my arms and legs weren’t mine to control, and my voice was mute. I couldn’t make a sign or sound to let anyone know I’d become aware again. I was invisible—the ghost boy.”

From the Overlooked to the Overcoming

When a caregiver started to notice Martin’s slight responses to her questions and observations, Martin’s doomed life of passivity bit by bit progressed into exuberant action. He moved from the overlooked to the overcoming.

I am grateful Martin’s family and other caregivers recognized his courage despite his myriad obstacles and unresponsiveness for more than a decade.

Can you imagine? For ten years you could hear everyone talking to you and talking about you, but you were unable to say a word or raise an arm in response. Like Martin, you would probably feel invisible too.

What was the glue that held Martin together while he sat nearly comatose until his mid-twenties? He writes: “The one person I talked to was God . . . He was real to me, a presence inside and around that calmed and reassured me . . . I spoke to God as I tried to make sense of what had happened to me and asked Him to protect me from harm. God and I didn’t talk about the big things in life—we didn’t engage in philosophical debates or argue about religion—but I talked to Him endlessly because I knew we shared something important. I didn’t have proof that He existed, but I believed in Him anyway because I knew He was real. God did the same for me. Unlike people, He didn’t need proof that I existed—He knew I did.”

I see Martin’s courage and I see yours. The obstacles and feeling invisible moments in your own life are building unexpected strength in you. You may not feel giddily triumphant, but you are day by day making your own comeback in the big and small.

And all the while, God is there listening and waiting right alongside you. Just like He was and still is for Martin. I see the courage in both Martin and you and I applaud. So keep going, my courageous friend. Your courage is contagious and worth spreading around.