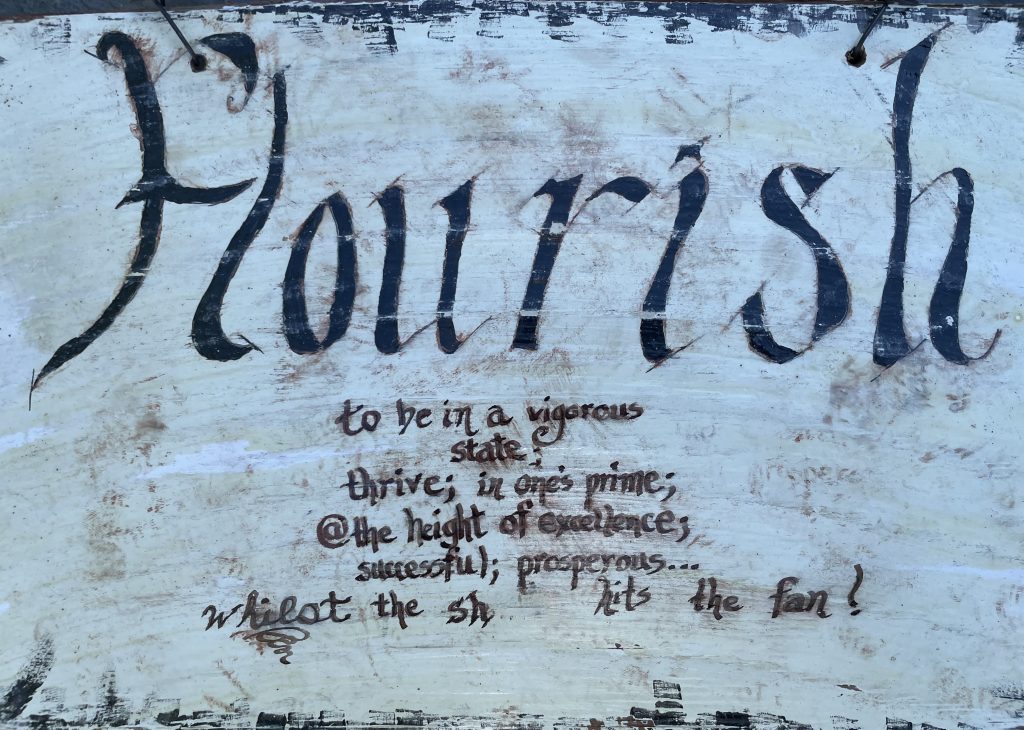 Go on, flourish! While you’re at it, enjoy more fun. Really? If you’re like me, you may need some rust knocked off your flourish and fun buttons these days.

I must say that I’m enamored by the word flourish. A few years ago, a close friend of mine gifted me with a handcrafted “Flourish” sign she created (see left) and it sits on my office desk. Her version of defining flourish makes me chuckle.

“Flourish: to be in a vigorous state; thrive; in one’s prime; @ the height of excellence; successful; prosperous . . . whilst the sh__ hits the fan!”

So according to this definition, we flourish when we thrive and are at the height of excellence while our circumstances are less than desirable. Boy howdy, that’s a tall order even for tall people like me. Perhaps flourish needs the contrast and backdrop of life challenges to shine at its best.  Could the same be said of us?

Bring on the Chortles

So, what fun these days will help you flourish? Maybe it’s reading the daily comics. Or watching a favorite comedy movie or TV show. Don’t forget to chortle and belly laugh at the absurd or unusual. Here, I’ll get you started.

Last month a local Colorado Springs man became the fourth man in history to push a peanut up to the top of Pikes Peak. Yep. With his nose.

Bob Salem, 53, took seven days to coax a peanut up the 14,115-foot mountain with a plastic contraption strapped to his face. The original peanut turned into more than two dozen peanuts because some fell into the cracks of rocks along the way.

Bob fueled his weeklong feat by eating peanuts, bananas, Pop-Tarts® and crackers. He found it difficult to stay hydrated with is nose to the ground of America’s Mountain.

“I don’t feel sore or anything, but I know I lost some weight,” Bob explained after he finished his proboscis-pusher journey. “My muscles are fine.”

The previous record holder accomplished the peanut marathon in eight days. Bob beat that peanut pusher by a day. Once Bob finished the trek, a city representative from nearby Manitou Springs awarded Bob with a jewelry box to house his final peanut. Bob also received two plaques commemorating his tenacious victory.

The Height of Excellence

Bob’s out-of-the-ordinary claim to fame makes me chuckle a bit. Pushing a peanut to a Rocky Mountain summit takes a combo of energy, patience and resilience. Bob, thanks, for reminding us that it’s okay to follow your dreams even if you simply work for peanuts.

Bob is flourishing or staying in his prime and reaching “the height of excellence” by not settling for a mundane life. Now, there’s no need for you and me to tackle a rare—oddball even—feat of spending a week coaxing a goober two and a half miles up a mountain. Nah. We can dial things down a bit.

How about we flourish by simply eating a PB & J while watching the sun set? Or flourish by thriving at simply doing our best with what we have in this day? And maybe dodging any doo or rogue peanuts that are flying our way.