Chernobyl Lesson: Do What You Can 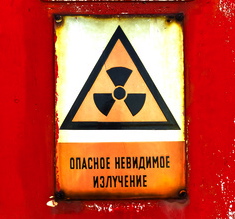 My time as one of the first Westerners into the Exclusion Zone near the Chernobyl Nuclear Power Plant continues to teach invaluable lessons that may pique your curiosity. This week the world recalled the 35th anniversary of the Chernobyl disaster, the world’s worst nuclear accident.

The devastating explosion shattered and spewed its way into history on April 26, 1986. Almost five years after the accident, I joined an American humanitarian group delivering aid to the Children of Chernobyl. Although we mainly distributed medical supplies, my chief role was journalist and observer of people and places.

One person of note that I have never written about is Vitaly (veeTAHleey). We’ll call him Vitaly because I did not write down his full name. Vitaly approached me at a gathering in Minsk to honor our American group. Smiling and jovial, Vitaly explained that he directed the building of the Chernobyl sarcophagus. This massive steel and concrete structure was devised to contain nuclear contamination from reactor number four.

At the time of my trip, I knew little about the herculean feat of constructing the sarcophagus. I wish I could have engaged in a more in-depth conversation with Vitaly. The construction process is daunting considering the workers were facing extreme radiation danger with little protective gear. Of course, the government pressured Vitaly and the workers to work speedily.

The design of the sarcophagus started 24 days after the initial reactor explosion. Construction lasted 206 days until late November. First, the engineering called for building a cooling slab under the reactor. The slab would prevent the sizzling nuclear fuel from searing through the foundations. Some 400 coal miners labored in sweltering conditions to dig a 168-meter long (551 feet) tunnel under the crippled reactor.

The building surged with intense radioactivity, so robots attempted to screw down nuts and bolts. The radiation dangers meant the sarcophagus seams could not be fully sealed. Vitaly’s team covered the still-active reactor with 400,000 cubic meters of concrete and about 16 million pounds of steel. Their risky labors sealed in 200 tons of radioactive corium, 30 tons of contaminated dust and 16 tons of uranium and plutonium.

But along the way, at least 31 people working to secure the plant from more radiation leakage died from acute radiation poison. Some of them probably worked directly with Vitaly. Yet after all this sacrifice and effort, Soviet scientists declared two years later that the sarcophagus would only last 20-30 years. The Object Shelter was never built as a permanent nuclear containment solution. 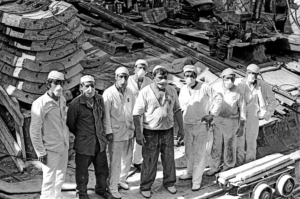 I wonder what Vitaly thought of this announcement. When I met him in January 1991, Vitaly seemed so proud of his engineering accomplishment and how he helped save countless lives from continuous radiation exposure.

As with most anything that is built under intense time constraints, something bigger and better will eventually come along. That something is the 32,000-ton outer shell called the New Safe Confinement. The behemoth arched structure was designed to slide over the old deteriorating sarcophagus.

Do What You Can

Construction of this multi-billion dollar structure began in 2010 and required 1,200 workers on site every day from over 30 different countries on site daily. At least 46 nations donated money to the project. The colossal building weighs 79 million pounds and is taller than the Statue of Liberty. In November 2016—30 years after Vitaly and his team completed their work—the completed shelled rolled over the original sarcophagus.

I’m not sure if Vitaly was alive to see this replacement structure secured or whether he had any part in its construction. But what I do know is the man I met at that Minsk soiree led his crews through hellacious conditions to help save their people. With little time to devise an architectural design and operating with heroic manpower, the original sarcophagus team finished their construction in 206 days—just over six months not six years.

America’s beloved president, Theodore Roosevelt, shared incredible wisdom that sums what the work of Vitaly and his co-laborers. “Do what you can, with what you have, where you are.” That includes flimsy protective gear and a coal miner’s shovel.

That night back in January 1991 before I left that Byelorussian event, Vitaly thanked me for coming to the Chernobyl region. He appreciated my telling the story of his brave and resilient people. Vitaly proudly handed me a bottle of Russian wine that I tucked in my carry-on. For years I displayed the wine in my office until a hasty downsizing. But whenever I looked at the Slavic writing on the label, I thought of Vitaly. I remembered the grueling life-and-death pressure he faced in helping to build the Chernobyl sarcophagus.

Vitaly, I raise a toast to you and your crew. Thank you for modeling that each of us is only called to step up to the plate today. Even if we work alone, we are to do what we can with whatever time, talent and resources we have. Right now. Without worrying about who or what will improve on our efforts decades later.